The Magazine was located in Kensington Gardens, in the midst of the spring blooms.  The modern styled building resembled a table napkin softly falling from height, just before it hits the ground.  The unusual design of the building allowed a lot of natural light to flood the contemporary interior.  Ellie and Sergio sat at a table by the window with views across the gardens, watching couples stroll hand in hand and sweaty joggers enjoying the late spring sunshine

“So what do you feel like for breakfast my princess,” Sergio asked playfully.  He was in a good mood, his smile warming his handsome features.  Ellie felt criminal to bring his mood down but decided it she needed to have the commitment conversation, it was now or never.

“Well I have to visit my Uncle in Hampstead to finalise the import of the wine from our families vineyard in Tuscany, it has to be done today, princess.” Sergio smiled at her, “coffee or tea?”

“Umm, tea thanks,” Ellie answered, “I can come with you, or you can drop by mine when you’re back.”

“Ah, well, this will take most of the day,” Sergio began, “he is useless with paper work and I need to have a full inventory for customs.”

“Ok, look Sergio,” Ellie looked at her fingers, interlaced on the white table cloth, then flicked her eyes up to meet Sergio’s, “where do you think our relationship is going?”

“Oh, one of those conversations?”

“Mmmm, well we haven’t had one before?” Ellie remarked.

“No, but it is one of those conversations!” Sergio repeated, putting emphasis on ‘those’.

Ellie looked at him, felt herself melting into his dark brown eyes and letting his smooth accent wash over her.  This is why she had never had this conversation before, she thought.

“Well, you know we’re not getting any younger, I would like to have kids before I hit 40!  And we haven’t moved on, really, I don’t even have a toothbrush at your place!”

“True, but it’s not really my place.  I’m just staying there until the import business really takes off then I’m going to buy my own place,” he looked at Ellie and then reworded what he said, “I mean we will buy our own place!”

“Ok, but when will that be, it could take another ten years, and then I will be 40!  I just feel like we’re in quick sand.”

The waiter approached and Sergio ordered their meals.

Sergio leant across the table and stroked her hand then grasped her fingers, “I love you, Ellie, you know that, but I am very busy.  Don’t you want us to be independently wealthy, then our children will have the best of everything, private school, nannies, tutors, holidays in the snow in winter in Barbados in summer?”

“Oh, I don’t know, I want our kids to be happy but to have everything handed to them, I want them to know how if feels to accomplish something yourself, to work hard and get the rewards that comes with that.  I’m not worried about being independently wealthy.” Ellie said.

“So you think we can both live in your tiny apartment in the basement with two children?”

“Then where would we live? Huh? Will the government give me on of those high rise flats in Chelsea?”

“I don’t want us to live there but I would like us to be together to build a life together.”

“That is what I am doing, princess.  I am making a life for us,” he smiled at Ellie and stroked her hand.

Ellie pulled her hands away, resting them in her lap, “ok, well perhaps we should have this discussion at home.” She looked up at the waiter as he  placed their meals in front of them.

“Hmm,” Ellie picked up her knife and fork and began to attack her breakfast.  She felt disillusioned and still no closer to a commitment.

“Ellie, did you remember the opening of Jonnie’s restaurant tonight?” Morgan called as she saw Ellie arrive at Penguin Publishing early on Monday morning.

“Lucky you don’t have to worry about childcare!” Morgan said, “besides you look amazing in that outfit, it will pass for the restaurant opening tonight.  I have been looking forward to this for weeks, a night out without the kids!  You are coming, you’re my plus one!”

Ellie looked at Morgan, and decided there was no point arguing with her, “ok, I’m in, saves me heating up another frozen meal, I guess.”

Ellie sat at her desk and waited for her PC to fire up.  Jonnie Agave, she thought, they had published his last recipe book a month ago.  He had become famous when he won the TV cooking show, Kitchen Virtuoso and had published a number of recipe books in that time.  She used his 15 Minute cook book regularly.  She had never met him but had heard from Morgan that he was a down to earth guy with a very warm personality.  Ellie sighed and began checking her email.

“You look amazing,” Ellie said to Morgan, “is that a Victoria Beckham?”

Ellie looked closely at the fitted dress Morgan was wearing for the restaurant opening, before they climbed into the waiting cab.

“Yeah, I never get a chance to wear it, and I don’t want to wear it around the kids, sticky fingers and all that!” Morgan smoothed the fabric of her dress with her palms, looking very pleased with herself.  “You went out and bought something?”

“Yeah, I ducked over to Whistles and picked up a blouse, it’s a little more evening shirt than my white shirt!”

It was a short drive to Agave’s restaurant located in Chelsea, and being a Monday evening there wasn’t a lot of traffic.

“Wow, there’s a lot of people here, are we getting fed as well?” Ellie asked, looking at the throng of people milling around outside the Agave restaurant.  She had noticed the new facade going up last week, giving the restaurant a sophisticated look with the dark frames, potted pines out front and a dark awning.

A waiter approached and handed them a glass of champagne before they were showed into the restaurant where they joined other guests milling around, enjoying the decor and lovely smells coming from the kitchen.

Ellie watched her face light up, and shook her head, “you really need to get out more, Morgan.  You and me this weekend ok?”

“Oh, no can do, football with the boys then Sadie has ballet and we’ve got Frank’s mum’s birthday on Saturday night!  That’s why this is such a treat.  You are so lucky you only have yourself to worry about.”

“Hey, Morgan, so good to see you! You know this restaurant is due to your belief in me!” Jonnie had emerged from the kitchen, wearing a bright white apron and chef’s hat.

“Nope, this is all you.  If I hadn’t snapped you up some other publisher would have, I just know a winner when I see one!” Morgan said as she threw her arms around his neck.  “This is Ellie she’s one of our head editors, a very good one as well!”

“Hi, Ellie, nice to meet you.  So you’re keeping each other company tonight?” Jonnie asked.

“Yes, I have a kid free night, with my glamorous editor!” Morgan put her arm around Ellie.

Ellie giggled, “How many champagnes have you had?”

“Yep, I think I need something to eat!”

“Let me get you the hors d’Oeuvres! Hey, over here,” he called waving down another waiter with a tray of tasty morsels.  “I’d better circulate, I’ll come and see you later”, he said giving Morgan another kiss. 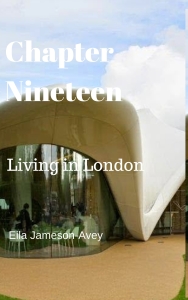 This entry was posted on September 10, 2015 by Eila Jameson-Avey in Musings and tagged Chapter nineteen, Kensington Gardens, The Magazine.