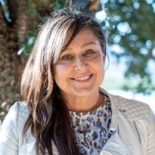 Mike ducked his head as Deb, Ellie’s mother led them to the living room on a mezzanine above the kitchen.

“This will have to be where you’re sleeping tonight.  I’m not having you out there with all that’s happening.” Deb said, referring to the small granny flat located in the laundry outside.

“Thanks mum.  Sorry to worry you.” Ellie said putting her overnight bag on the fold out bed.

“Thanks Deb,” Mike added, “I hope we’re not putting you out too much.”

“No, of course not.  It’s always nice to see the kids, especially when she’s making me a grandmother, before my time, I’d like to add.”

Mike put his arm around Ellie’s shoulder, protectively, a pained expression on his face.

“Well I’ll leave you to get comfortable and I’ll make us all a cup of tea.  Would you like something to eat?  Have you had dinner?” Deb said, almost without taking a breath.

“Oh.  I can get something out of the freezer.”

Deb disappeared down the short flight of stairs and busied herself in the kitchen.  Mike peered over the railing of the mezzanine to see Deb removing things from the fridge.

Ellie sat on the pull out lounge, feeling herself being sucked into the spongey softness of the historical mattress and springs.

“She’s really worried.  Perhaps we should have gone to a hotel?” Mike said as he sat beside Ellie.

“I know.  I feel bad as well.  But she would have killed me if she knew we didn’t come here.”

“Okay, sandwiches are ready when you are!” Deb called from the kitchen below.

Mike pulled himself out of the pull out lounge and then offered Ellie a hand.

“Here, a cuppa can make everything seem a lot better.” Deb offered.

She sat down across from them as they hungrily ate the sandwiches she had prepared.

“So tell me again, you think the people who did that to your face have tried again this evening?  And you think it’s all linked to Kate?”

Mike and Kate looked at each other over their sandwiches and Ellie began telling her the events of the evening, with Mike finishing off the details of the mugging in London.

“We have contacted the police, D.I Thompson.  They’re going out to see Noni tonight and will be in touch tomorrow.  He said we’d be safe here tonight.” Ellie finished, lifting her cup to her lips.

“Well, you wouldn’t read about it in a book.  Would you love?”  Deb said looking at Ellie.

“I’m really sorry to put you in this position….” Mike began.

“Nonsense, I won’t hear any of that.  Where else are you going to go, though it would be nice to see you when things are going well?”

Ellie awoke, gasping for breath, dreaming of being suffocated, her face buried into Mike’s back,.  She tossed and turned for the next hour and at 2am, Ellie climbed out of the bed and went to the get a glass of water.   The old pipes creaked and thumped before releasing the prized chilled, clear water.

As she drank, she looked out the large kitchen window at the blackened the country side, making out nearby trees and shrubs by their darkened shadows.  The sliver of a moon disappeared behind heavy clouds, completely darkening the landscape.

Ellie recalled spending holidays here when she was in high school, during the summer.  The isolation in her teen years was unbearable and the feeling of missing out on what the rest of the gang were doing.

Ellie caught a movement from the corner of her eye and Ellie’s heart began to race.  Had she seen something?  Frozen on the spot she was compelled to search the landscape.  Everything was still.  She turned away from the window when from the corner of her eye she spied another unusual movement.  Holding her breath she scanned the area, only moving her eyes, for fear of being seen.  A rabbit hopped from the offending shrubbery and disappeared into the bottom of the garden.

At that moment the moon broke free from the clouds and lightened the shadows, Ellie felt her heart rate slow down, relieved that the reason for her momentary panic was so mundane.

Ellie sighed as she climbed the short flight of stairs to her makeshift bedroom.  The thought of lying awake stuck to Mike’s side for hours, unappealing.  Climbing into bed, she allowed herself to roll into Mike again, and despite the feeling of suffocation enjoyed the closeness and the security if offered.

“God Noni, how could you do that?  How could you carry on like this for so long?  I thought I knew you!” Billy said, his voice strangled.  He couldn’t even look at Noni.

She had told him of her complicity to what had happened to Ellie and how she knew where Kate was.

“I, I’m so sorry.  Billy, please I don’t want this to destroy us.” Noni sniffled, her eyes swollen and red, her nose runny and her cheeks damp from her tears.  “I, I, I didn’t know what else to do and I wanted to tell you so much but Will said he would hurt you as well.”  Noni broke down again, her shoulders heaving.

Billy was torn, he wanted to comfort her but he was also appalled by what he had heard.  He reached for his phone.

“What are you doing?” Noni called, getting from the lounge, “you can’t call he will kill us and then them!”

“Who Noni?  You need to let the police know, they have the address for where Kate is.  They’re going to find out who is behind this and probably that you were helping them.”  Billy dialled the number Mike had left him for D.I Thompson.

Noni ran into their bedroom, slamming the door behind her.

This entry was posted on August 14, 2016 by Eila Jameson-Avey in Read the next chapter and tagged Dr Mike, Ellie, fear, hiding, Kate, Living in London, london, Noni, relationships, Ryder Robertson.

Everyday With The Emery's

Tales from an overly curious and wildy unusual human being

David Milberg is a New York based financier and investor in the theatrical arts.

Sharing my learnings of being a mother